Stephen Fry Award for Excellence in Public Engagement with Research 2016

The Great War Dundee (GWD) Commemorative Project are thrilled to have won the Stephen Fry Award for Excellence in Public Engagement with Research 2016.

The award recognises the work of outstanding University communicators in improving understanding of the research and practice of the University to a wider audience. The winners receive a trophy and £1500 prize money to use towards their future communication activities.

Stephen Fry (former Rector at the University) personally congratulated the project group in a recording which was played at today’s Discovery Day, where the winners were presented with their award.

The interactive Roll of Honour is now live!

We’re excited to annouce that our interactive Roll of Honour is now live! Traditionally, a Roll of Honour commemorates those who paid the ultimate sacrifice however, with this ambitious project, we’re aiming to tell the stories of every Dundonian who experienced The Great War. Visitors will be able to search records for information relating to those who fought and fell, those who survived, and even those who experienced the First World War on the Home Front.

Creating an interactive Roll of Honour like this is major undertaking; as you’ll see, some records are fuller than others, some records may even be incorrect, and in some cases, some men have even been missed off the official Roll of Honour entirely, but we’d like to rectify this! We’re looking for information, photographs, and family memories to tell these stories.  We’ve already had some fantastic contributions from members of the public, local history groups, and researchers. We’d love for the Dundee public to share information about their family member’s experiences of the First World War. Using this information, we hope to create a lasting and fitting tribute to those of the city who contributed to Dundee’s efforts during the Great War.

If you came to Remembering Loos, you might have caught our presentation of our visualisation, Loos: The Fallen Fourth. We’re pleased to announce that it’s now available for download.

Loos: The Fallen Fourth is the interactive story of the 4th Black Watch: Dundee’s Own. It is the story of the city of Dundee and how it was affected by a single battle hundreds of miles away. To download, visit this link and follow the instructions on screen.

Tickets for ‘The Guns of Loos’ are on sale now

Great War Dundee and Dundee Contemporary Arts present a very special screening of The Guns of Loos to mark the 100th anniversary of the Battle of Loos. Not seen in Scotland since the 1930s and with a newly commisioned score performed live by one of the UK’s leading composers and performers, Stephen Horne, this event is not to be missed. See the DCA film listing for more information

Tickets are priced at £10 (£7) and can be purchased from the DCA Box Office or online. 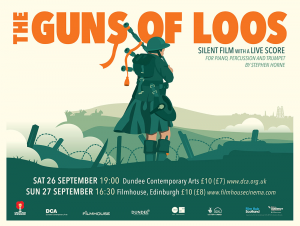 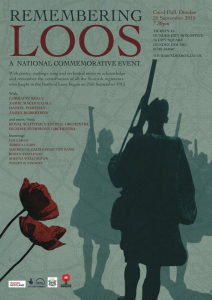 Remembering Loos tickets are now on sale. Tickets are priced at £5 and can be purchased from the Dundee Box Office, either in person or online at www.dundeebox.co.uk.
Tv presenter Lorraine Kelly, BBC Radio One Scotland presenter Jamie MacDougall, Daniel Portman (Podrick Payne in Game of Thrones), and Scottish author James Robertson will bring to life the words and stories of those in trenches and the home front.

Songs and orchestral music will be performed by RSNO and Dundee Symphony Orchestra, Dallahan, and Robyn Stapleton (2014 Winner of BBC Scotland’s Young Traditional Musician of the Year) to name but a few.

Following the event, Great War Dundee invite you to view an exhibition of storyboards created by  pupils of St Johns and Morgan Academy as part of a project with Education Scotland.

The Great War Dundee team recently organised two sessions where members of the public could explore the contents of the recently opened GPO Memorial Shrine for the very first time. The time capsule, which was created in 1921, was opened on the 4th August 2014, marking the centenary of Britain’s entry into World War One. The time capsule contained many photographs, newspapers and even letters written by soldiers in the trenches.

Held at the McManus Collections Unit, the Lord Provost and other invited guest speakers read out letters which have been sealed away for the past ninety-three years and added their thoughts and comments. The participants were also given the opportunity to get hands on and have a closer look at the material. Museum curators were also on hand to answer any questions about the contents of the time capsule and the Great War Dundee project.

Both sessions booked out very quickly so we are hoping that we will be able to hold this event again in the future.

Great War Dundee’s latest event, Remembering: The Christmas Truce took place on Saturday 6th December 2014 at Discovery Point. Experts from the Black Watch Museum and Castle showed us how we can find out more about our family’s military past and we even heard about the rumoured football match on the trenches – it seems that it really happened!

The most popular talk of the day explored the impact that the First World War had on local footballs clubs, Dundee FC and Dundee United FC (or Dundee Hibernian as it was then!) Over 119 people attended the event and, by all accounts, it was a great success!