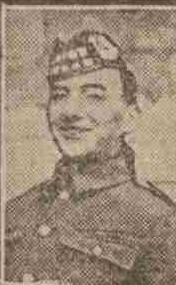 Private Alexander Parr, son of Mr James Parr, 24 Dallfield Walk, has been awarded the Military Medal for gallantry in the field.  Private Parr is 21 years of age, and has been at the front for nearly three years.  His eldest brother, Reginald, was killed in the fighting at Cambrai, while his younger brother John is serving with the R.E.  Prior to enlisting, Private Parr was a barber with Mr Lesslie, Wellgate.

Can you tell us more about Alexander Parr'? Some additional facts, a small story handed down through the family or perhaps a picture or an heirloom you can share online. Contact our curator...