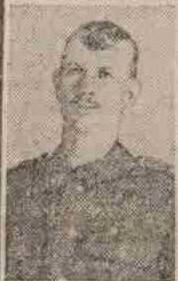 WHO HAD SEEN SERVICE IN SOUTH AFRICA.

Mrs John Barnett, 16 Nelson Street, has just received word that her husband, Private John Thomas Barnett (38), of the 2nd Scots Guards, was killed in the fighting around Ypres on 26th October.

Private Barnett two years ago completed a period of sixteen years with his regiment, and has since worked as a stoker in Broughty Ferry Gasworks.  He was through the South African War, and came out of it with two medals and six clasps to his credit.

Deceased leaves a widow and two of a family.

Can you tell us more about John Thomas Barnett'? Some additional facts, a small story handed down through the family or perhaps a picture or an heirloom you can share online. Contact our curator...