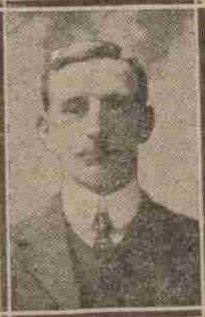 Yet another of Dundee’s soldier sons has fallen victim to the war fiend.  Mrs Barty, 9 Middle Street, Dundee, has received intimation that her husband, Private David Barty, of the 4th Hussars, died on 16th December from wounds received in action.  Barty was called up at the commencement of the war as a reservist.  He had seen eight years service in Africa, and since his return to Dundee four years ago had been employed as a ship caulker.

In the last letter to his wife, dated 9th December, he wrote in a very cheery strain, wishing her a merry Christmas and a happy New Year.   “Don’t be downhearted,” he continued, “but enjoy yourself as best you can.”  Deceased who was 38 years of age, leaves a widow and two of a family.

Can you tell us more about David Barty'? Some additional facts, a small story handed down through the family or perhaps a picture or an heirloom you can share online. Contact our curator...