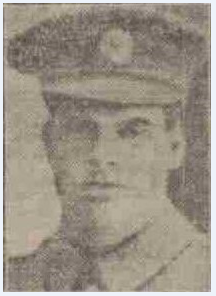 Thomas has no known grave but is remembered on the Tyne Cot Memorial.

Pte. Tom Butchart, Sherwood Foresters, is officially reported missing on 16th August.  He joined in October 1915, and has been at the front since January this year.  In a letter to Mrs Butchart, who resides at 47 Hill Street, his Lieutenant states :___”Your husband was a man whom I greatly valued, and had proved his sterling worth.  He was keen, efficient, and brave, and in his constant care for members in his section when under heavy fire and in wretched weather was magnificent.”  Pte. Butchart, who was an enthusiastic member of Fairfield F. C., is a son-in-law of Mr C. C. Graham, 45 Arbroath Road, at one time a sergeant in the 1st Forfar and latterly 1st V.B.R.H.

Can you tell us more about Thomas Butchart'? Some additional facts, a small story handed down through the family or perhaps a picture or an heirloom you can share online. Contact our curator...