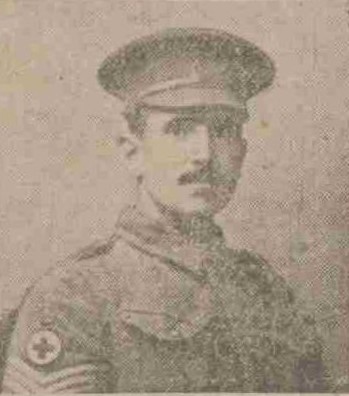 Another employee of the “Dundee Courier” has been awarded the Military Medal.  The recipient on this occasion is Staff Sergeant David M’Kechnie, of the R.A.M.C.

Staff Sergeant M’Kechnie, was in the employment of D. C. Thomson & Co., Limited, for about eleven years.  Two years prior to the outbreak of the war he was transferred to the commercial department of their Manchester Office.  Immediately on the commencement of hostilities Staff Sergeant M’Kechnie enlisted in the R.A.M.C., and after seven months’ training was sent on active service.  Since then he has been at the Dardanelles, in Egypt, and in France.

Staff Sergeant M’Kechnie was presented with his decoration at the front a short time ago, and he writes to his mother, who resides at 24 Thomson Street, Dundee, as follows :___”I paraded along with some others who have got the Military Medal, and the General duly pinned the broach, with the ribbon of the medal attached to it, on my  “manly bosom.”  As each man stepped forward to be decorated the G.O.C.’s aide-de-camp read out what we had got it for.  (I was wishing he would dry up).  He shook hands with each one as he pinned on the ribbon, and wished us “Good luck.”  I can tell you I was glad when the ordeal was over and the parade marched away.

Can you tell us more about David McKechnie'? Some additional facts, a small story handed down through the family or perhaps a picture or an heirloom you can share online. Contact our curator...