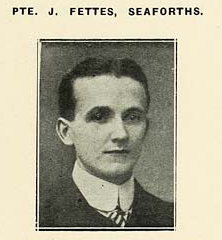 John has no known grave but is remembered on the Basra Memorial.

Private John Fettes, Seaforth Highlanders, who resides at 5 Barber’s Croft, Arbroath, was wounded in the left leg and arm on November 30, and intimation has been received that he has been admitted to hospital at Windermere.

He has been in the trenches since March last, and previous to enlisting was employed as a moulder in Arbroath.

Private John Fettes, of the Seaforth Highlanders, whose wife and child reside in Barber’s Croft, Arbroath, was killed in action on 21st April.  He enlisted in September 1914, previous to which he was a moulder with Messrs Jas. Keith & Blackman Co., Ltd.  His father, Mr Jas. Fettes, is a plumber in Brechin.

Can you tell us more about John Fettes'? Some additional facts, a small story handed down through the family or perhaps a picture or an heirloom you can share online. Contact our curator...