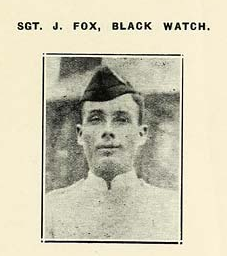 Sergeant James Fox was the son of James Fox, a shoemaker, and Mary Reid (later Fairweather) of 40 Fergus Square, Arbroath. He was a ploughman at Downfield, Dundee, and joined the Territorials in 1911, being mobilised with war broke out. He died of wounds on 26th March 1915 and is buried at Chocques Military Cemetery, France. He was the brother of Pte William Fox Reg No 30, 5th Battalion Black Watch, who died 07.12.1918.

Can you tell us more about James Fox'? Some additional facts, a small story handed down through the family or perhaps a picture or an heirloom you can share online. Contact our curator...