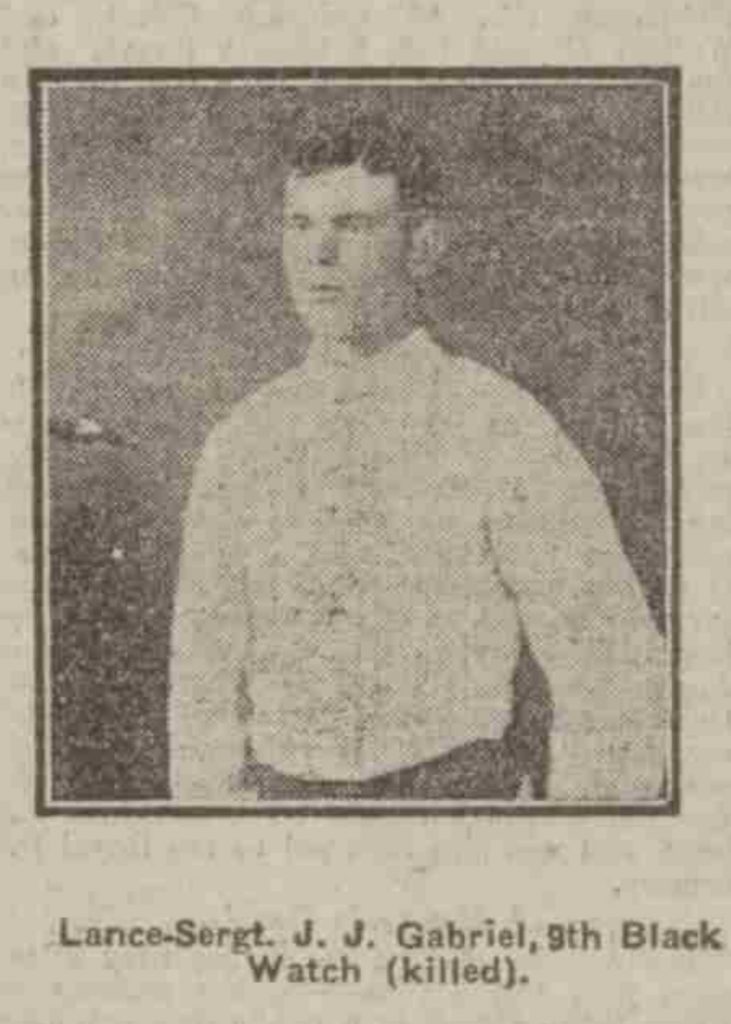 11268 Pte. David Gabriel, 2nd Royal Scots (pictured), was killed in action on 28 February 1915, aged 23. The second son of William and Jane Gabriel, 22 Gellatly Street, Dundee, David was a regular soldier, arriving in France with his battalion on 11 August 1914.
He is commemorated on the Ypres (Menin Gate) Memorial, West-Vlaanderen, Belgium, Panel 11.
David was one of three sons serving with the colours. His elder brother, 343 L.-Sgt. James John Gabriel, had served almost eight years in India with the 2nd Black Watch.
He was recalled from the reserve following the outbreak of war, joining the 1st Black Watch in France. Wounded at the Aubers Ridge on 9 May 1915, he spent time in hospital in Aberdeen, before being posted to the 9th Black Watch, a New Army battalion in the 15th (Scottish) Division. He was killed in action at Loos on 25 September 1915, aged 28.
James is buried in Philosophe British Cemetery, Mazingarbe, Pas de Calais, France, III. G. 30.
Pte. Alexander Gabriel, 4th Black Watch, was wounded in May 1915, but survived the war.

DUNDEE FAMILY HARD HIT. The patriotism of Mrs Gabriel, 22 Gellatly Street, Dundee, is being subjected to a severe strain.
Mrs Gabriel has given three of her sons to fight for King and country, and of these one has been killed and one wounded.
Private David Gabriel (23), of the Royal Scots, was killed in action on 28th February, and Mrs Gabriel has now received a postcard from her eldest son, Sergeant James John Gabriel, 1st Black Watch, stating that he was wounded in 9th inst.
Sergeant Gabriel is 28 years of age. He served fully seven years with the Black Watch, nearly all of that time having been spent in India. After war was declared he was transferred to Nigg, and from there he travelled to the Continent on 10th February. Sergeant Gabriel is now in hospital in Aberdeen.
The third son, Private Alexander Gabriel, is of the 4th Black Watch, and he, too, is at the front. The Courier, Wednesday, 19 May 1915, 4.

TWO DUNDEE BROTHERS KILLED IN ACTION. Mr William Gabriel, 22 Gellatly Street, Dundee, has had two sons killed and one wounded.
In February last Private David Gabriel (23), Royal Scots, fell in action, while information has just been received that Lance-Sergeant James John Gabriel (28), 9th Black Watch, was killed on 25th September. The lance-sergeant, who had been almost eight years in the 2d Black Watch, was wounded in May, but returned to the firing line in July attached to the 9th Battalion.
A chaplain, writing to the deceased’s father, states: – “I have seen the dear boy’s body, and I buried him on the battlefield just where he fell. He was a bright boy, and a great favourite with all the men of his company.”
The youngest brother, who is only 18 years of age, was a private in the 4th Black Watch and has just joined the second line of the “Fourth” after recuperating from a wound received on 12th May. The Courier, Tuesday, 2 November 1915, 6.

Can you tell us more about James John Gabriel'? Some additional facts, a small story handed down through the family or perhaps a picture or an heirloom you can share online. Contact our curator...