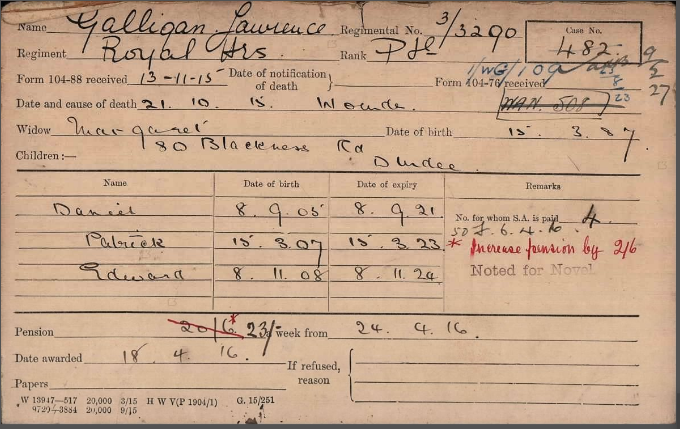 Lawrence Galligan was born in Scouringburn, Dundee on the 10th of February 1877, to Edward Galligan & Rose Smith (of Co. Longford & Co. Cavan, Ireland).

In Lawrence’s early years, Edward was an out-of-work weaver and Rose sewed sacks in order to pay for her children’s schooling (newspaper articles).

Lawrence had one sister and four brothers that we know of (Annie, Patrick, Joseph, Edward, and Thomas). By 1891, Rose and her children worked in a jute mill.

In 1897, Lawrence married Maggie Ann Foley, and he is listed as a furniture dealers labourer. Later records show he went back to work in the jute mill and was a reservist. Lawrence & Maggie had ten children that we know of, four lived to be adults (Ellen, Daniel, Patrick, and Edward).

In the 1911 census, he lived at 12 Burnett Street in Dundee with his family.

Mrs Galligan, 42 Brook Street, Dundee, has received official intimation of the death in a French Hospital on 10th inst. of her husband, Private Lawrence Galligan, 1st Black Watch.  Private Galligan, who was 36 years of age, served twelve years in the 3rd Battalion.  When called up as a reservist at the outbreak of war he was employed as a mill worker.  He leaves a widow and four of a family.

Can you tell us more about Lawrence Galligan'? Some additional facts, a small story handed down through the family or perhaps a picture or an heirloom you can share online. Contact our curator...