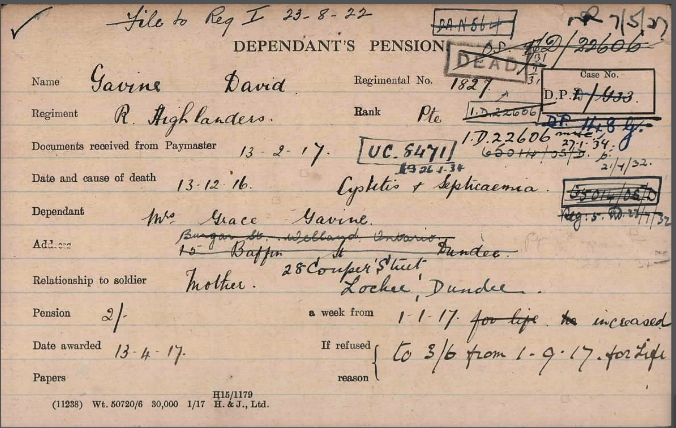 MILITARY FUNERAL AT DUNDEE.—Private David Gavine, Black Watch, 15 Baffin Street, Dundee, was buried with military honours on Saturday.  Deceased, who was attached to the Black Watch, left with the battalion in February, 1915.  He was wounded five months later, his spine being damaged.  Private Gavine lay in Netley Hospital for thirteen months, and was afterwards removed to Ralston House, Paisley, where he died on Wednesday.  The Rev. H. M. Rankine, St. Paul’s, officiated at the house and at the grave.  A firing party and pipers from the Royal Scots were in attendance, while Mr Andrew Blackwood, the headmaster, and a party of the boys from Cowgate School, at which deceased had been a pupil, were also present.

Can you tell us more about David Myles Gavine'? Some additional facts, a small story handed down through the family or perhaps a picture or an heirloom you can share online. Contact our curator...