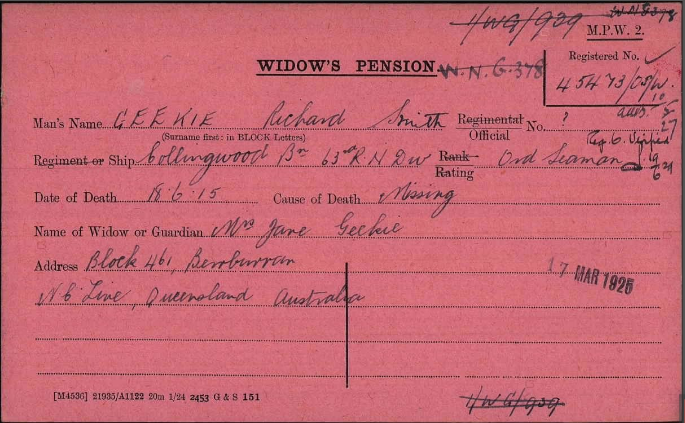 Richard has no known grave but is remembered on the Helles Memorial. His address is also listed as 38 Jamaica St, Dundee.

Official notification has been received of the death of Seaman Richard S. Geekie, Collingwood Battalion, Royal Naval Division.  Deceased joined at the outbreak of war, and proceeded with his battalion to the Dardanelles, where he met his death.  He was 33 years of age, and a son of the late Mr John Geekie, slater, 7 Paterson Street.  For many years he was an enthusiastic member of Clyde Moor Football Club.

Wife informed by Rev. Frank Cairns, that her husband died on 4th June 1915, being shot through the head whilst getting over the parapet. ; Born 26th September 1881. A Lamplighter. At the time of his enlistment he was living with his wife, Jane, at 84 Rosebank Street, Dundee, Forfarshire.

Can you tell us more about Richard Smith Geekie'? Some additional facts, a small story handed down through the family or perhaps a picture or an heirloom you can share online. Contact our curator...