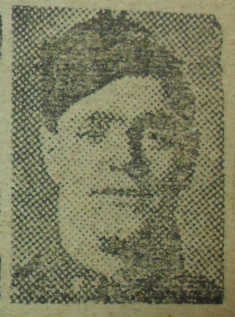 Son of the late Mr & Mrs Robert Gilkison of Dundee. (C.W.G.C. lists Robert as his father)

Mr and Mrs George Gilkison, 2 Burnett Street, have received news that their son Pte. Thomas Gilkison, A & S.H., has died of wounds on 30th September.  Pte. Gilkison, who was 30 years of age, joined up in 1914, and went to France shortly afterwards.  Be fore enlisting he was employed by Messrs Beardmore and also by Messrs J. & P Coates.  His home was at Newton Grange, Green Road, Paisley, where he leaves a widow and three children.  Before leaving Dundee Pte. Gilkison served his apprenticeship in the Royal Institution for the Blind as a basketmaker.

Mr and Mrs Gilkison have also received news that their other son, Pte. Robt. Gilkison, Black Watch, has been wounded for the fourth time.

Can you tell us more about Thomas Gilkison'? Some additional facts, a small story handed down through the family or perhaps a picture or an heirloom you can share online. Contact our curator...