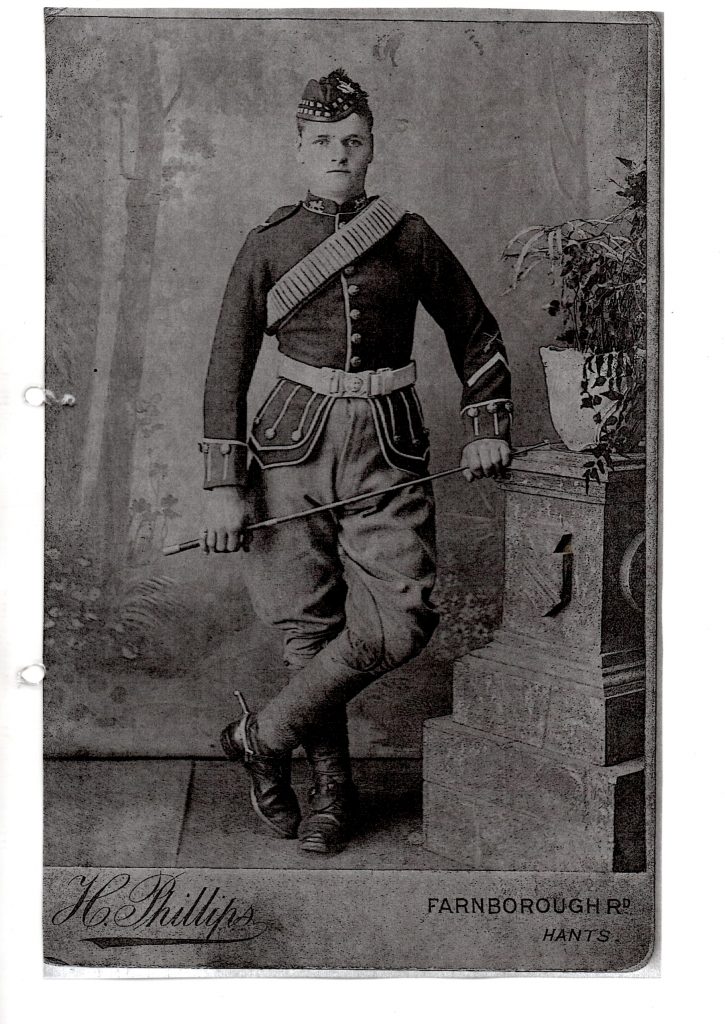 William was born at 10 Walton St, Dundee on 17 February 1881 to Robert a (Slipper Maker) and Francis Harvey. He was working as a Mill worker when he enlisted aged 18 in the Gordon Highlanders on 27 November 1899. William saw service in South Africa fighting in the Boer War before returning to the U.K. 26 April 1903. On returning to Dundee he obtained employment in the Blackness Foundry as a Crane-man.

In 1911 William left Dundee for Canada first to Montreal and then making his way to Winnipeg, Manitoba where he obtained employment with the Canadian Pacific Railway as a Turntable-man and latterly as a Crane-man, whilst there he also enlisted in the local Winnipeg Militia (79th Cameron Highlanders). When war broke out, William enlisted on 25 October 1914 in the 27th Battalion, Canadian Infantry which was recruiting in Winnipeg. Shortly after on 12 January 1915, he transferred over to the Princess Patricia’s Canadian Light Infantry as part of the “500 Draft” which was to provide reinforcements for that Regiment.

He crossed over to France with the “Pats”reinforcements 23 February 1915. He was promoted to the rank of Lance Corporal on 19 April.

“On the 3rd May his regiment, the “Princess Pats” received orders to withdraw from their trenches at Polygon Wood to a subsidiary line based on the Bellewaerde and Frezenberg Ridges. The move was aimed at removing the threat of being enveloped by the German successes in  the North. They were to pass through the forward units and rest at GHQ Line just outside  Ypres, however later that day this order was changed to occupying a forward position in  a new trench line. The 2nd Kings Shropshire Light Infantry, who were supposed to occupy that spot, were moving north to help stabilize the Canadian flank so the “Pats” were tasked with replacing the K.S.L.I. This withdrawal to the new position was undertaken during the cover of darkness through Polygon Wood which was carried out without the Germans becoming aware of their withdrawal.

On reaching the new line the Regiment were very disappointed at the condition of their new position, almost no prior work had been completed on this new defensive position. They were to occupy a ditch which was supposed to be the forward trench and a previous artillery position was meant to be the support line. Communication trenches between the two lines were mere scrapes in the ground. Only the wire in front was considered adequate. By 3.00.am on the morning of the 4 May  all the men were occupying this new line. The men worked hard through the night trying to improve the defences of this new position, whilst this was in progress the Germans pushed forward their machine guns to within 200 yards of the “Pats” position and began to rake the unfinished parapets with fire.

The German artillery joined the fray at 9.00am, Heavy shelling continued throughout the day blowing in the forward lines. When the King’s Shropshire Light Infantry relieved the battalion on the evening of 4 May, The Patricia’s had lost 26 men and 96 wounded. These were the heaviest single day casualties suffered by the Regiment up to that date.”

His mother received a letter from one of his comrades a Pte McDonald soon after informing her ” Being a friend of your son William, a Dundee man, I had promised in case of any accident, to acquaint you of the circumstances. I am sorry to say that your son was killed in action by artillery fire at noon on 4th May almost instantaneously. I merely promise you that he was taken care of, and was buried as a good, true British soldier deserved to be. His effects were gathered by me, and will be forwarded to you as soon as possible. The rest of the men in the section join sending you their sincere sympathy.”

He was buried in the trench along with the other 25 men where they fell but the location was lost so William is remembered on the Menin Gate Memorial.

There are also references to William in the local Dundee Newspapers held in Dundee Central Library.

Exract from “With the Patricia’s, Holding the Line”, 2005, by Stephen K. Newman

Can you tell us more about William Harvey'? Some additional facts, a small story handed down through the family or perhaps a picture or an heirloom you can share online. Contact our curator...