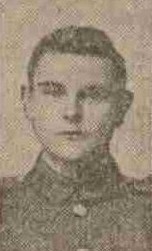 Private Harry W. Henderson, of the Royal Scots, who was recommended for the D.C.M. some time ago, has now been reported to have been killed in action on 23rd October.

The distinguished action which the deceased soldier performed was that of successfully bombing an enemy trench which he had been ordered to reconnoitre.  An chaplain writes to his mother, who resides at 42 Hillbank Road, Dundee, as follows :–“In these dark days which bring sad news to the homes of so many of our brave soldiers I am sorry that the shadow should be cast on yours.  Your son while going about his duty was killed instantaneously by a German shell, and we have laid him to rest in a little soldiers’ cemetery.”

Private Henderson enlisted about eighteen months ago, and had been over a year at the front.  He was an only son, and was 23 years of age.

Can you tell us more about Henry William Henderson'? Some additional facts, a small story handed down through the family or perhaps a picture or an heirloom you can share online. Contact our curator...