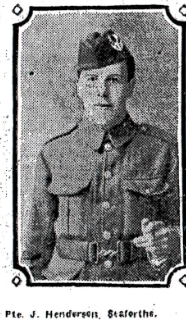 Mr and Mrs Thomas Henderson, 22 Dundonald Street, Dundee, have received a letter from the regimental chaplain informing them of the death of their son, Private John Henderson, of the Seaforth Highlanders.  In his letter the chaplain states that Private Henderson was killed in action on the 18th inst. by the bursting of a shell.

“He had done nobly at his post,” the chaplain remarks,  “and his loss is regretted not simply for his soldier like qualities, which he possessed in a marked degree, but as a comrade, cheery and bright.”

The deceased was Mr and Mrs Henderson’s third son.  Twenty-two years of age, he had been in the army for sixteen months, and prior to enlistment was a calender worker in the employment of Baxter Bros. & Co., Ltd.

Can you tell us more about John Henderson'? Some additional facts, a small story handed down through the family or perhaps a picture or an heirloom you can share online. Contact our curator...