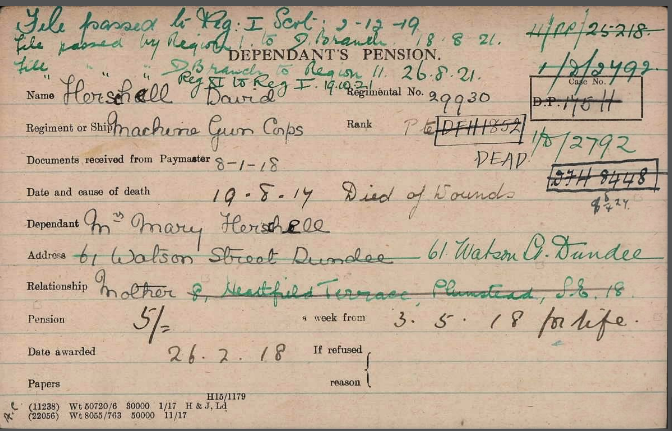 Mr and Mrs Herschell, 61 Watson Street, Dundee, have been officially informed that their sixth son, Private David Herschell, Machine Gun Corps, has died of wounds at a casualty clearing station at the front.  Deceased, who was twenty-three years of age, had been ten months at the front.

Deceased, who was twenty-three years of age, joined the forces in October, 1915, and went to the front about eleven months ago.  Prior to enlistment he was employed as a dresser with Baxter Brothers & Co., Ltd.  He had took a keen interest in local junior football, playing back for East Craigie.

An officer, writing to his parents, says :___”Although his wounds were serious, we had great hopes that his robust and gallant determination would pull him through, but the Great Creator who rules over all has decreed otherwise, and we must bow before His judgment, confident that no more worthy son of His has ever given up his life in so worthy a cause, and we cannot but console ourselves with the remembrance of a gallant boy, beloved by all for his warm heart and comradeship, while we his officers, in addition deplore the loss of so gallant a machine gunner.”

Can you tell us more about David Herschell'? Some additional facts, a small story handed down through the family or perhaps a picture or an heirloom you can share online. Contact our curator...