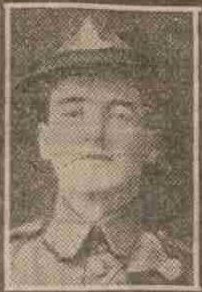 Intimation has been received in Dundee that Private Harry Irvine, Australian Forces, son of Mr Joseph Irvine, late of 235 Lochee Road, Dundee, has died of wounds received in action.  Deceased left Dundee for New Zealand, where his father still resides, in June, 1914.  He had just arrived there when war broke out, and he joined the New Zealand Forces.  After much service he was discharged, but re-enlisted in the Australians.

His brother, Private Joseph Irvine, New Zealand Forces, is at present on leave in Dundee.

Can you tell us more about Harry Irvine'? Some additional facts, a small story handed down through the family or perhaps a picture or an heirloom you can share online. Contact our curator...