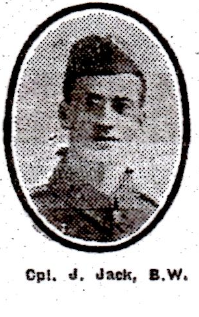 Corporal James Jack, M.M., Black Watch, whose parents reside at 186 High Street, Lochee, has been previously wounded on four occasions.  He gained the Military Medal in 1916, while he was also mentioned in despatches.  At that time he secured his commission on the field, but before his arrival in London he was recalled to France.  He acted as goalkeeper for Lochee Central.

There is no mention of a M.M. on James Medal Index Card of C.W.G.C.

Can you tell us more about James Jack'? Some additional facts, a small story handed down through the family or perhaps a picture or an heirloom you can share online. Contact our curator...