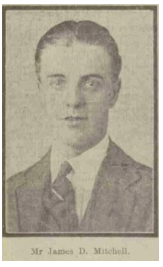 For reasons unknown this man is not listed on the original Dundee Roll of Honour, but is remembered on Dundee’s Harris Academy Honour Roll. James was a Saloon passenger aboard the liner, his ticket number was No 11956 and he was staying in cabin E-53. His address is also recorded as 5330 Glenside Ave, Philadelphia, USA.

James Duncan Mitchell: He was born in Dundee, Scotland, 25 March 1892 and had been brought up in Wormit, on the River Tay in Scotland, and had attended Wormit Public School (from 1898) and the Harris Academy, Dundee. His parents were George C., a jute merchant b. 1854 in Forfarshire, Scotland, and Margaret (nee Summers; she had been born 1855 in Forfarshire) Mitchell. In 1911, he lived in Broughton Salford, Lancashire, England, with his parents. He was described as an unmarried clerk in ’’export merchants cotton.’’ His father George was noted as a ’’managing director sack and bag factory.’’ He had come to Rouses Point, New York, 20 April 1915, and was listed as a ’traveling salesman.’ He had travelled second class on the Messinche (?) from Halifax, Canada, likely bound for New York to join the Lusitania; he seems to have re-entered the USA 1 May 1915. His father George was noted as living at Broadway, Willington, England, at the time. James D. Mitchell was 6’ tall, had fair hair and blue eyes. He did not survive the sinking of the Lusitania. In his will, he left £3,201 2s 6d to George Clarke Mitchell, noted as a manufacturer. His address was stated to have been 15 Broadway, Wittington, Manchester, England.

The RMS Lusitania was a British ocean liner, owned and operated by the Cunard Company. Her keel was laid on 16 June 1904 and she was launched on 7 June 1906. Lusitania began her maiden voyage out of Liverpool, England on 7 September 1907 and arrived in New York, United States, on 13 September.  Lusitania was the largest, fastest, and most luxurious ship in the world at the time of her launch, although she was soon eclipsed in size and speed by her sister Mauretania and in size and luxury by rivals Olympic and Titanic.  Lusitania would make 101 round-trip voyages (or 202 crossings) during her 7-year-and-9-month  career. Lusitania became a casualty of World War I (1914 – 1918). On 7 May 1915, Lusitania was torpedoed off the coast of Ireland by the German submarine (or u-boat) U-20, sinking in 18 minutes.  Of the known 1,960 people on board, 767 survived and 1,193 perished in the Lusitania disaster. Four of those survivors died in the following months, bringing the numbers to 763 survivors and 1,197 victims. The wreck of the Lusitania lies at 51°25′N 8°33′W, about 300 feet (91 meters) underwater and approximately 11 miles (18 km) south of the Old Head of Kinsale, Ireland.

Can you tell us more about James Duncan Mitchell'? Some additional facts, a small story handed down through the family or perhaps a picture or an heirloom you can share online. Contact our curator...