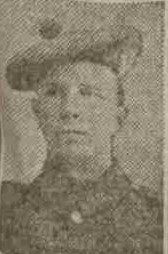 Private James Leitch, Gordon Highlanders, whose wife resides at 6 Thorter Row, Dundee, has been awarded the Military Medal for conspicuous bravery on the field.  Private Leitch enlisted 2½ years ago, and had been in France for two years.  His parents, who reside at 25 Wolseley Street, have had five sons in the army, three of whom have been killed in action.

Can you tell us more about James Leitch'? Some additional facts, a small story handed down through the family or perhaps a picture or an heirloom you can share online. Contact our curator...