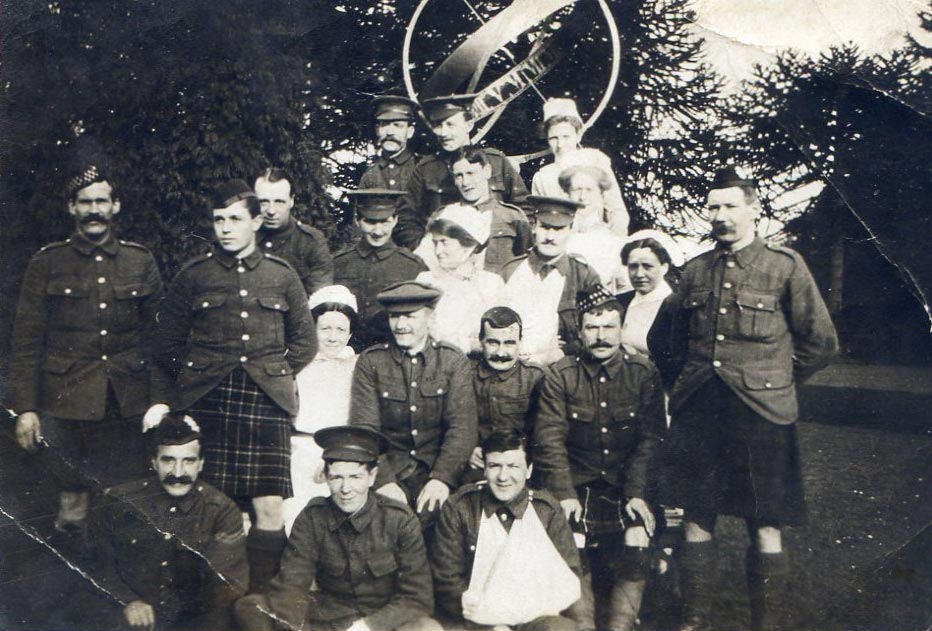 A group of soldiers drawn from a mix of regiments, gathered around an armillary sundial in the grounds of Woburn Abbey. James Nicoll is pictured front left kneeling and Thomas Donaldson is on the right standing.

In the early years of the 1900s, JAMES WILKIE NICOLL, born 2 May 1876 in Dundee, was a member of the 4/5 Black Watch pipe band based in Dundee. This was a Territorial Army Regiment and it would appear from photographs taken on their annual summer camps that James was the company Piper for the HQ Company.

Through research at the Black Watch Museum Perth it has been confirmed that in the fighting on 10 March 1915 at Neuve Chapelle, two members of their pipe band, 832 Piper Thomas Donaldson and 263 Pipe Cpl James Nicoll, suffered injuries to their chests. Both were transferred to the temporary military hospital at Woburn Abbey.

A letter, received by James’ wife, was published in the Courier newspaper. The letter was written by Thomas Donaldson. Thomas explained that James had been injured in his chest, right side, while he himself had been injured in his chest, left side. Both were right handed, so therefore, as James could not write, he had to write all the letters for both of them. Thomas assured James’ wife that their health was improving and they were being treated well at Woburn Abbey.

There is very little information on admissions and discharges of military casualties at Woburn Abbey and the names of James Nicoll and Thomas Donaldson are not among the surviving records. The picture above shows James and Thomas on the terrace of the Abbey which curators at the Abbey have confirmed.

The Medical Officer stationed at the Abbey during the WW1, and possibly treated both James and Thomas, was a New Zealand surgeon, Bryden Glendinning. He sadly died in 1927 and is buried within the churchyard at Woburn.

James Nicoll survived the war, but on returning home, he contracted the dreaded Spanish Flu which was sweeping the globe. James died on 18 November 1918 at Dundee Royal Infirmary.

Can you tell us more about James Wilkie Nicoll'? Some additional facts, a small story handed down through the family or perhaps a picture or an heirloom you can share online. Contact our curator...