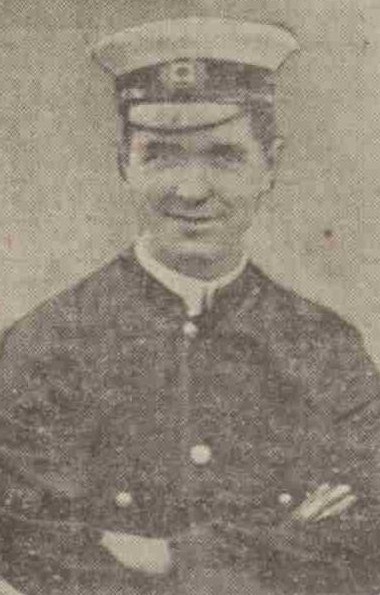 DUNDEE ENGINEER ON BOARD.

A Dundee man was on board the auxiliary armed merchant cruiser H.M.S. Viknor, which the Admiralty announce will have to be accepted as lost.

Johnston was an engineer on the ill-fated vessel, having enlisted for the war.  He had previously sailed on merchant vessels.  He served his apprenticeship in Dundee with Messrs Cooper & Greig.

Mr and Mrs Johnston, Ramsay Place, Lochee Road, have received the sad intimation from the Admiralty that their son, Alexander, an engineer warrant officer on H.M.S. Viknor, is now presumed to have lost his life in the wreck of that vessel in the Irish Sea last week.

Alexander was serving aboard H.M.S. Viknor which was a 5386 Ton Blue Star Line Ship, formally the Viking. She was requisitioned by the Royal Navy as an armed Merchant Cruiser and was part of the 10th Cruiser Squadron blocking the seas between the North of Scotland and Iceland.

During the first weeks of 1915 the Viknor was on patrol off the North West coast of Ireland. She appears to have been in radio contact but she was to disappear in heavy weather on January 13th, close to Tory Island, off the coast of Donegal, without sending a distress signal. She took with her the entire 291-man crew, as well as a German national who had been taken off a ship the neutral Norwegian vessel Bergensfjord, under suspicion of being a secret agent, as well as six other men who have been cryptically referred to as “stowaways”. Some wreckage and many corpses were subsequently washed up on the Irish and Scottish coasts.

Though the exact cause of the Viknor’s loss cannot be established with certainty, it is possible that she struck a German mine. This could possibly have been one of the 200 laid in the same general area by the German auxiliary cruiser Berlin, one of which had already sunk the British battleship HMS Audacious on October 27th 1914. The Viknor’s wreck was found by the Irish survey vessel Celtic Explorer in 2006 but the reason for her loss could still not be identified with absolute certainty.

Can you tell us more about Alexander Johnston'? Some additional facts, a small story handed down through the family or perhaps a picture or an heirloom you can share online. Contact our curator...