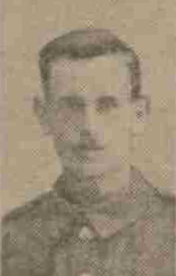 The sad news of the death from wounds received in action of Private Robert Elder Lawson, Royal Scots Fusiliers, has been received by his parents.

Private Lawson who was a son of Mr and Mrs James Lawson, 16 Kinloch Street, Dundee, enlisted in February of this year.  He had been at the front for only six weeks.  Deceased soldier was 25 years of age, and was prior to enlistment employed as a clerk by Baxter Bros. & Co., Ltd., spinners and manufacturers, Dundee.

Can you tell us more about Robert Elder Lawson'? Some additional facts, a small story handed down through the family or perhaps a picture or an heirloom you can share online. Contact our curator...