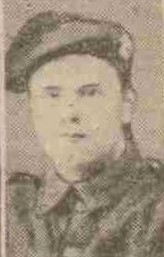 THREE BROTHERS KILLED AND ONE GASSED.

Private William Lindsay, Black Watch, intimation of whose death has just been received, is the third brother to give up his life in the war.

Mrs Lindsay, 27 North Ellen Street, Dundee, received the sad news yesterday of her husband’s death.  An officer, in a sympathetic letter, stated that Private Lindsay was engaged carrying up ammunition to the firing line, when he and another two comrades were killed by a German shell.

Deceased, who was 23 years of age, was prior to enlistment a checker in the goods department of the Caledonian Railway.  He joined in February, 1915, and was wounded in the back on the 9th of May following.  He rejoined his battalion in February last.  His brother, Private Peter Lindsay, Black Watch, was killed in June of last year, while George a private in the Royal Scots, fell in action in April last.  Private James Lindsay, Argyll and Sutherlands, was gassed about the beginning of May, 1915.

Can you tell us more about William Lindsay'? Some additional facts, a small story handed down through the family or perhaps a picture or an heirloom you can share online. Contact our curator...