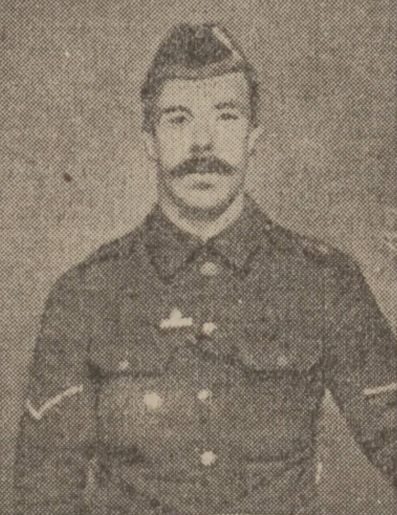 2164 L.-Cpl. John Loftus, A Company, 4th Black Watch, was one of three men belonging to Dundee’s Own killed in action on 12 March 1915.
Loftus was a former regular soldier having served in the Black Watch for some ten years. He was a joiner, whose wife and three young children lived at 25 Temple Lane.
He was killed by a shrapnel shell which also claimed the life of one of his comrades, 2040 Cpl. Robert Logan. John Loftus is commemorated on the Le Touret Memorial, Pas de Calais, France.LANCE-CORPORAL KILLED BY BURSTING OF A SHELL. Lance-Corporal John Loftus belonged to A Company, and the intimation of his death was contained in the following letter from Captain N. C. Walker to Mrs Loftus, 25 Temple Lane: –
“It is my painful duty to inform you that your husband was killed in action on the 12th of this month. His death was instantaneous, being caused by the bursting of a shrapnel shell, which also carried off one of his comrades. Lance-Corporal Loftus was a good soldier, and will be much missed by the officers, n.c.o.s, and men of his company, who extend to you their sincerest sympathy in your sad loss.”
Deceased, who was 37 years of age, was an ex-soldier, having served for ten years in the Black Watch. He answered his country’s call on 7th August. Mrs Loftus, who lost her right hand through an accident, is left with three children, the oldest of whom is six years, and the youngest is thirteen months. The lance-corporal, who was a joiner, was employed as a sub-factor on the property in Temple Lane in which he resided. The Courier, Monday, 22 March 1915, 4.

Can you tell us more about John Loftus'? Some additional facts, a small story handed down through the family or perhaps a picture or an heirloom you can share online. Contact our curator...