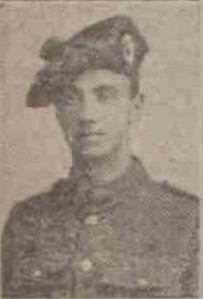 Lance-Corporal Peter Lowson, Seaforths (killed), was a son of the late James Lowson.  Prior to enlistment he was employed as a commercial traveller with Mr Bryson, oil merchant, Trades Lane.

Can you tell us more about Peter Duncan Lowson'? Some additional facts, a small story handed down through the family or perhaps a picture or an heirloom you can share online. Contact our curator...