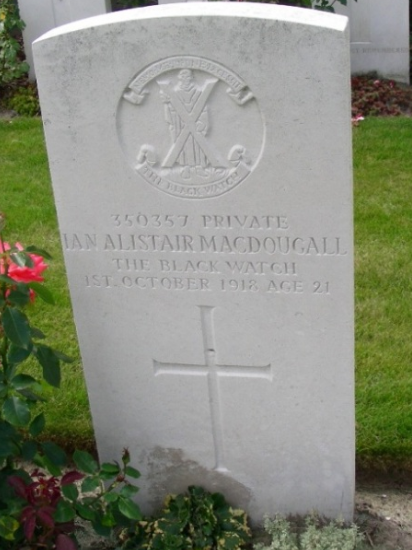 When war broke out Private Ian Allister MacDougall joined the Highland Cyclist Battalion and went on active service in September 1917. He is named on the 1914-1918 War Memorial in St. Margaret’s Church, Barnhill, Dundee. He was a pupil of Grove Academy, Broughty Ferry,  and is also remembered on the school Roll of Honour.

The Commanding Officer of the 8th Black Watch, writing to signaller McDougall’s parents, says :–“In an attack by the Huns several of our lads got cut off, and by the very gallant fight they put up we were enabled to hold the line and eventually stop the enemy.  Your boy was one of those groups.  We tried to get back and get them out, but it was impossible owing to the machine-gun fire.”

Can you tell us more about Ian Allister Macdougall'? Some additional facts, a small story handed down through the family or perhaps a picture or an heirloom you can share online. Contact our curator...