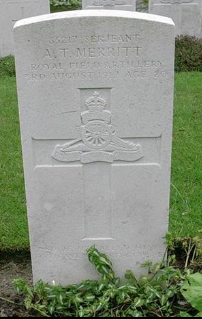 Sergeant Arthur T. Merritt, R.F.A., has been killed in action.  Previous to enlistment shortly after the outbreak of war he was employed in a bank in Dundee.  He was 22 years of age, and had been on active service for fully a year.  Deceased was the eldest son of Captain A. H. Merritt, R.F.A., who was also employed in the city prior to the outbreak of hostilities.  Captain Merritt was an ex-soldier, but rejoined the colours, and has risen from the rank of sergeant-major to that which he now holds.

Can you tell us more about Arthur Thomas Merritt? Some additional facts, a small story handed down through the family or perhaps a picture or an heirloom you can share online. Contact our curator...