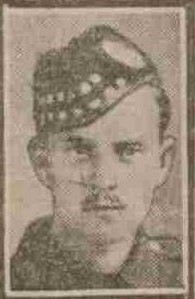 Private Michael Foley, Royal Scots, who was previously reported missing, has sent a letter to his wife, who resides at 64 Blackness Road, stating that he is a prisoner of war.  Private Foley, who is 25 years of age, had been at the front for two years, and had been twice wounded.  He was formerly employed with Halley Bros., Ltd., South Ward Road.  His brother Thomas was killed in May last year.

Can you tell us more about Michael Foley'? Some additional facts, a small story handed down through the family or perhaps a picture or an heirloom you can share online. Contact our curator...