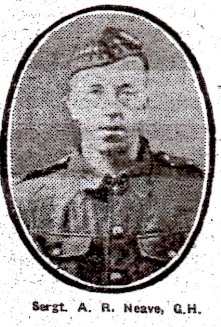 There is no A. R. Neave, 8212, of the Gordon Highlanders recorded on either the C.W.G.C. or S.D.G.W. databases, although their is a photo of him in the Peoples Journal War Memorial Supplement, published May 16, 1925 (see attached).

Regimental Number 8212, was allocated to Sgt Alexander Ritchie (born Lochee, Dundee) of the 2nd Battalion Gordon Highlanders. He was killed in action 05.09.1916. (Believe this to be the same man)

AFTER NINETEEN MONTHS AT THE FRONT.

Five stalwart sons of Mrs Neave, 6 Anderson’s Lane, Lochee, rushed to the colours immediately on the outbreak of hostilities.  Two have been killed, and three still remain in the service.

Mrs Neave has just received intimation of the death in action of her son, Sergt. Alex Ritchie Neave, after nineteen months’ service at the front.  The deceased soldier, who was 24 years of age, was serving with the Gordon Highlanders.

Writing to Mrs Neave a comrade of the fallen hero states :–“Alex fell in the last fight we had.  He was one of the best-liked lads in the battalion, and never shirked his duty.”

Private William Neave, his brother, was killed in the battle of Mons, while Charles, another brother, has been wounded four times, and is at present in Aberdeen, where he is acting as a drill instructor.

Can you tell us more about Alexander Ritchie Neave? Some additional facts, a small story handed down through the family or perhaps a picture or an heirloom you can share online. Contact our curator...