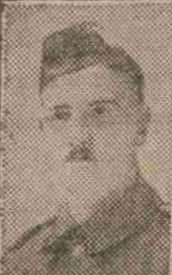 Mrs Patterson, 81 Victoria Road, Dundee, has received intimation that her only son, Corporal Arthur C. Patterson, has been killed in action, on 20th August.  Corporal Patterson enlisted in the Black Watch 14 months ago, and was later transferred to the machine gun section.  He had been a year at the front.

In civilian life he was employed as a clerk with Messrs W. Robertson & Co., merchants, Meadowside.

Can you tell us more about Arthur Calvert Patterson'? Some additional facts, a small story handed down through the family or perhaps a picture or an heirloom you can share online. Contact our curator...