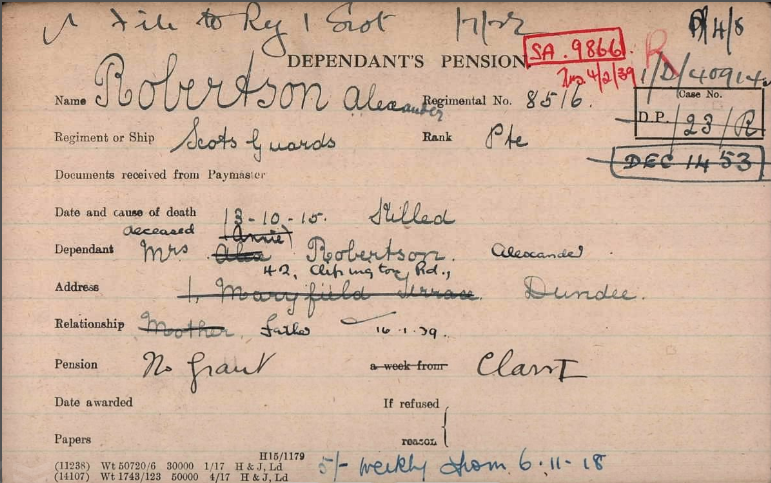 8516 Alexander Robertson 2 Scots Guards
Died of Wounds 13/10/15 aged 21 years
Another Dundee laddie casualty of Loos .  Alexander was a Regular Army Guardsman of the 2nd Bn The Scots Guards and had been in France and Flanders with the BEF since October 1914 taking part in battles around the First Battle of Ypres and later at the Battles of Neuve Chappelle, Aubers Ridge and Festubert. Which were all essentially in the same geographical area North of the La Bassee Canal.   Both regular Battalions were taken out of the BEF to be included in a newly formed Guards Division where the 2nd Bn formed part of the 3rd Gds Bde
Alexander was born in Broughty Ferry and resided with his parents in Maryfield Terrace , Dundee,  a matter of yards away from Morgan Academy in the Maryfield / “Stobbie” area of Dundee
The Guards Division was in Reserve for the Battle of Loos alongside two inexperienced New Army Divisions.  The Guards Div being recognised as an “elite” formation went forward early to assist in exploiting the limited gains beyond Lens Road Redoubt and in particular Hill 70
On 27 September 1915, when the 3rd Guards Brigade (2nd Battalion) were moving in preparation to attack a German-held position known as Hill 70, via Loos, an artillery barrage caught them, causing many casualties among the Guards.
It seems likely that Alexander will have suffered his wounds in this attack or immediately thereafter as he died of his wounds on 13 October 1915 the day before the assaults around Loos were stopped
His Medal Index Card shows his entitlement to the less common 1914 Star denoting his participation in the BEF of 1914 and his Pension records show his father being awarded a Pension of 5 shillings a week for the loss of his son
Alexander was 21 years old

Can you tell us more about Alexander Robertson'? Some additional facts, a small story handed down through the family or perhaps a picture or an heirloom you can share online. Contact our curator...