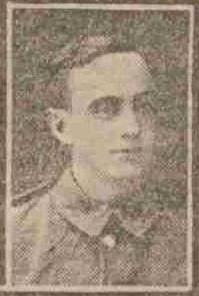 Private George B. Robertson, Royal Scots, son of Mr Robertson, 12 Gellatly Street, who was reported missing since 3rd May, 1917 is now presumed to have died.  Private Robertson was 22 years of age, and had been in France since June, 1916.  Before enlisting he was employed in the Dundee Free Libraries.  His brother Alexander is at present serving with the Royal Engineers in Italy, while his brother-in-law, Sapper James Petrie, Royal Engineers, is in Mesopotamia.

Can you tell us more about George Brotchie Robertson'? Some additional facts, a small story handed down through the family or perhaps a picture or an heirloom you can share online. Contact our curator...