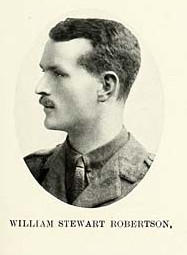 William was awarded the Military Cross on 22.09.1916 “For conspicuous gallantry during operations, when posting a standing patrol close to enemy lines, a machine gun wounded two of his party. After getting the wounde men into safety, he returned and brought in his telephone, which had been left behind, although he was being closely watched he displayed great coolness and courage throughout”.

KILLED IN DUG-OUT BY SHELL.

A promising life has been cut short by the death of Lieutenant W. S. Robertson, Black Watch, who was killed by a shell in a dugout on Sunday last.

Lieutenant Robertson, was the youngest son of the Rev. Dr Robertson, Clepington Parish Church, Dundee, and was only 23 years of age.  He was educated in Harris Academy and the High School, Dundee, and St Andrews University.  In the session previous to the outbreak of war he was an honours student in classics, and during the same session he edited Echoes, the University magazine, to which he made many contributions both in prose and verse.  Although an undergraduate, he was chosen on some occasions to represent St Andrews in inter-University debates.

Immediately after war was declared Lieut. Robertson applied for a commission, and was gazetted second-lieutenant on August 26, 1914.  He was promoted first-lieutenant on March 1, 1915, and had been at the front since November 13, 1915.  He was recently awarded the Military Cross.

A brother officer of the deceased mentions in a letter to the Rev. Dr Robertson that “Lieutenant Robertson was in charge of the company during one of the finest bits of work any battalion has ever done.  He will be missed by men and officers here.  He was a very fine soldier, and his wonderful cheerfulness and wit helped us all many a time.”

Another officer speaks of the late lieutenant as being “great in every way—a fearless soldier and capable, and charming comrade.  He was just a very dear lad.  We will all miss him tremendously.”

Can you tell us more about William Stewart Robertson'? Some additional facts, a small story handed down through the family or perhaps a picture or an heirloom you can share online. Contact our curator...