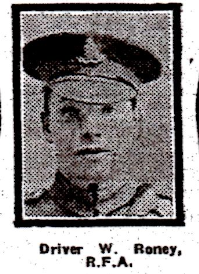 Driver William Roney, R.F.A., son of Mr and Mrs Roney, 25 Kinnaird Street, Dundee, is reported to have been killed in action in France.  Driver Roney, who was 21 years of age, joined the forces in June, 1915, and in January, 1918, was sent to France.  Previous to enlistment he was employed in Bowbridge Works W & A. D. Grimond, Ltd.  His father was also a member of the forces, but was discharged from the Royal Engineers through wounds, while his brother James is serving with the Royal Scots.

Can you tell us more about William Roney? Some additional facts, a small story handed down through the family or perhaps a picture or an heirloom you can share online. Contact our curator...