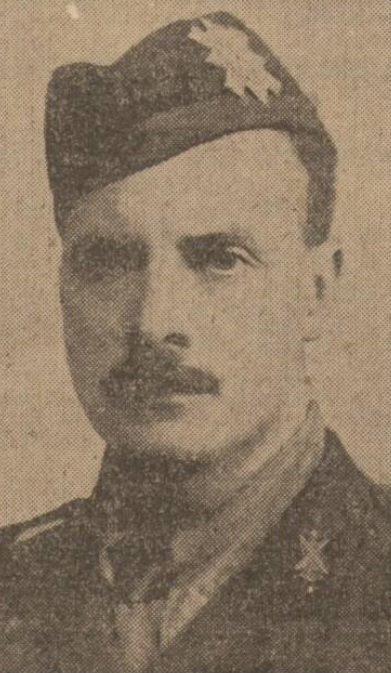 On 18 August 1916, Captain Thomas Handyside Baxter Rorie, 4/5th Black Watch, attached 10th Gloucestershire Regiment, was killed in action in France, aged 41.
The son of Dr and Mrs James Rorie, and husband of Blanche M. Rorie, Captain Rorie was a well-known chartered accountant and local sportsman.
He is buried in Bazentin-le-Petit Communal Cemetery Extension, Somme, France, J. 2. He was survived by a widow and young daughter.POPULAR DUNDEE OFFICER KILLED. THE LATE CAPTAIN T. H. B. RORIE. A splendid sportsman, and a thorough gentleman. Captain T. H. B. Rorie, Dundee, whose death in action has been announced, was all these.
News that the gallant officer had fallen in battle was received by Mrs Rorie, Drumgeith, and when the sad event became known throughout the city many were the expressions of regret by those who had known the captain, whether as a soldier, in business, or in sporting circles. His pleasing personality had won him friends wherever he went.
Captain Rorie, who carried on business as a chartered accountant in Dundee, was 41 years of age, and was the elder surviving son of Dr James Rorie, formerly medical superintendent at Westgreen Asylum. He was educated at Dundee Institution in Tay Square and at the High School, and served his apprenticeship with the late Mr David Myles, C.A., Dundee. After being admitted a member of the Glasgow Chartered Accountants’ Society in 1897 he started business on his own account in Dundee.
An old volunteer, Captain Rorie joined the Black Watch shortly after war broke out, and was transferred to the Gloucesters about six weeks ago.
In business Captain Rorie held a number of public appointments, including audits from the Scottish Office and the Local Government Board, and was auditor of the Dundee Corporation gas accounts and the Common Good account. He was a member of several public bodies, on which he rendered useful service. These included the Parish Council, the Harbour Trust, and the Dundee District Committee of the Forfar County Council.
In sporting circles the captain was well known as a cricketer, being a member of the Forfarshire and the Grange clubs. He toured with the Tayside Ramblers when they played matches in England. He was also an exponent of Rugby and Association football.
Captain Rorie was fond of mountaineering, and delivered racy lectures of his experiences in the Alps and Pyrenees.
He is survived by Mrs Rorie and a young daughter, for whom much sympathy is felt in their bereavement. The Courier, Saturday, 26 August 1916, 4.

Can you tell us more about Thomas Handyside Baxter Rorie'? Some additional facts, a small story handed down through the family or perhaps a picture or an heirloom you can share online. Contact our curator...