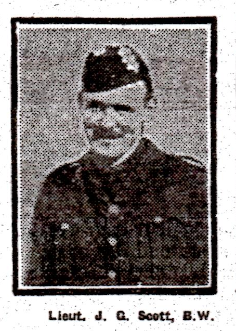 John has no known grave but is remembered on the Ploegsteert Memorial.

“A GALLANT LEADER OF MEN.”

Mr William Scott, Dryburgh, Lochee, has received the following letter, written by Lieut-Colonel C. E. Stewart, 1st Black Watch, and bearing the date 13th inst., regarding his son, Second-Lieutenant J. G. Scott, 1st Black Watch, who has been reported missing since 9th inst :– “It is with the deepest regret that I have to write to tell you that your son is missing.  He was on the right of his company in a successful charge which carried part of the German line on Sunday afternoon.  Ours was the only regiment which got in, and after a time the order was given by the General Commanding that we were to with-draw.  I cannot get any definite information about your son, save that he was leading his men on to the German second line.  It is just possible that when wounded he was captured.

“He had proved himself before a gallant and good leader of men.  We fear we may have lost a brave and true comrade.”

Can you tell us more about John Gordon Scott'? Some additional facts, a small story handed down through the family or perhaps a picture or an heirloom you can share online. Contact our curator...