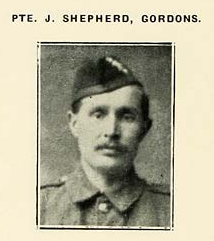 James was an Iron Moulder in Carnoustie, and enlisted in October 1914 in the Black Watch, but was later transferred to the Gordon Highlanders. For two years he served on Home Defence, and had been at the front four months when he was wounded at the Battle of Arras on the 23rd April 1917. He died the following day, and is buried in the communal cemetery at Aubigny, near Arras. His commanding officer wrote deeply regretting the death of “such an excellent sioldier.” Arbroath Roll of Honour, page 104.

Can you tell us more about James Shepherd? Some additional facts, a small story handed down through the family or perhaps a picture or an heirloom you can share online. Contact our curator...