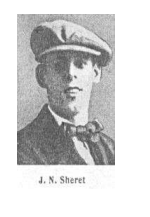 DUNDEE SOLDIER WHO IS GAZETTED

DIES ON DAY OF PROMOTION.

A sad fate was in store for Private James Urquhart Sheret, a Dundee young soldier. Private Sheret, who was only 19 years of age, was mobilised with his regiment, the Fife and Forfar Yeomanry, and shortly afterwards despatched to St Ives.  About a week ago he contracted pneumonia, which resulted in his death on Monday.

A singularly pathetic feature is that negotiations for the gazetting of Sheret as Second Lieutenant just closed the day he met his death.

Private Sheret, who was a “three years’ man,” was apprenticed to A. J. Brough & Co., Taybank Works, Dundee, as a jute examiner, and was about to leave for Calcutta in that capacity when the war intervened.  He is to be buried at St Ives to-day with full military honours.

It may be mentioned that a brother of the deceased, Andrew Stephen Sheret, is at present with the Scottish Horse at Morpeth.

“Nursed to the end by Miss Lucie Strickland Blaydes, Nursing Sister. On Lucie’s British Red Cross card it notes this special care for Trooper James. Lucie received a “valuable services rendered” mention from the Secretary of State for War by the Chairman of the Joint War Committee. James’ stated age at death was only “18”, he died of pneumonia. He death was registered at St. Ives, Huntingdonshire.”

Can you tell us more about James Urquhart Sheret? Some additional facts, a small story handed down through the family or perhaps a picture or an heirloom you can share online. Contact our curator...