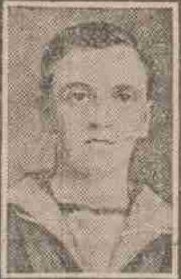 Andrew has no known grave but is remembered on the Arras Memorial. He was the brother of Cpl David L. Smith, 18375, 12th Battalion Highland Light Infantry, who was killed in action, 25.09.1915.

Bandsman Andrew C. Smith, Royal Naval Division, was killed in action, on 23d April.  His widow lives at 19 Langlands Street, Dundee.  Deceased was twenty-one years of age, and was a Naval Volunteer at the outbreak of war.  He was at Antwerp with the R.N.D., and afterwards saw service at Gallipoli, and latterly in France.  His brother, Corporal David Smith, H.L.I., was killed at Loos, while a brother, Sergeant George Smith, H.L.I., is still serving.  Deceased was a baker with Mr James Durkie, Stobswell.

Andrew`s father, George, was a jute bleacher and in 1901 the family lived at 17 Clepington Street, Dundee. His brothers, George, a Sergeant, and David, a Corporal, both served in the Highland Light Infantry with David being killed in action at Loos.

A Unicorn Band member who joined the RNVR in 1913. Served at Antwerp and then Gallipoli where he was wounded and evacuated by hospital ship to Britain. Rejoined the Hood Battalion in France in November 1916 after the Battle of the Somme and was killed in action at Gavrelle.

Can you tell us more about Andrew Christie Smith'? Some additional facts, a small story handed down through the family or perhaps a picture or an heirloom you can share online. Contact our curator...