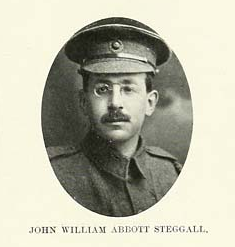 John has no known grave but is remembered on the Portsmouth Naval Memorial. He was serving aboard H.M.S. Invincible which was a Battle cruiser of the Royal Navy, the lead ship of her class of three, and the first Battle cruiser to be built by any country in the world.

On this day, 31 May 1916: Lieutenant John William Abbott Steggall, only son of Professor and Mrs Steggall, Woodend, Perth Road, Dundee, was killed in action when H.M.S. Invincible was lost at Jutland.
The Invincible was flagship of the 3rd Battlecruiser Squadron. At 6.30 on 31 May 1915, she engaged the German battlecruisers Lutzow and Derfflinger. A shell caused an explosion in her midships magazine and Invincible sank in some 90 seconds. 1026 of her crew were killed. There were only six survivors.
Lieutenant Steggall is commemorated on both the Portsmouth Naval and the University of Dundee Memorials. In his will he left £100 to the Dundee belgian Relief Fund.

DUNDEE OFFICER LOST IN NAVAL BATTLE. LIEUTENANT J. W. A. STEGGALL, OF THE INVINCIBLE. A Dundee officer who was serving on the Invincible has lost his life in the North Sea engagement.
Intimation has been received from the Admiralty by Professor Steggall, Woodend, Perth Road, that his only son, John William Abbott Steggall, B.Sc., A.M.I.C.E., was killed in the naval action. Deceased was an instructor, and held the rank of lieutenant.
Lieutenant Steggall was born on August 22, 1887, and was educated at Dundee High School, Fettes College, and St Andrews University. He studied engineering under Professor Fidler, and graduated B.Sc. in engineering in 1909, and in pure science a year later. After two years’ service on the engineering staff of the Caledonian Railway Company, he was recommended by Mr Donald Matheson, general manager, for an important post in connection with the construction of a railway near Port Victoria, Brazil. He held that post for two years, and came home on leave in June, 1914.
In September of the same year deceased enlisted, under the auspices of the Institute of Civil Engineers, in the Royal Naval Division, joining the ranks. He saw foreign service in the trenches in Gallipoli, and it is a remarkable circumstance that some three transports on which he travelled were torpedoed immediately after the completion of his voyages. He returned to this country in the late autumn of last year to take up duty as a naval instructor, with the rank of lieutenant, on the Invincible.
Lieutenant Steggall was much interested in his work, and seemed to like sea life. He appears to have been entrusted with a good deal of work connected with wireless telegraphy. Lieutenant Steggall was in Dundee only twelve days before his vessel was lost. The Courier, Monday, 5 June 1916, 2.

Can you tell us more about John William Abbott Steggall'? Some additional facts, a small story handed down through the family or perhaps a picture or an heirloom you can share online. Contact our curator...