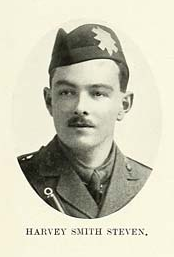 Lieutenant Harvey Smith Steven studied at Dundee High School prior to joining the Scottish Horse Yeomanry in September 1914. He was later commissioned into the 4th Black Watch in February 1915.

Intimation of Lieutenant Steven’s death came to hand yesterday in letters from brother-officers and an official telegram from the War Office, which also contained an expression of sympathy from Lord Kitchener.

Major Rogers, 4th Black Watch, stated in his letter that Lieutenant Steven was killed by a rifle grenade in the trenches, and added–“Britain is the poorer to-day of two of the bravest and most gallant lads that ever lived.”

The late Lieutenant Steven went to the front only three weeks ago, and was posted to the company to which his brother Sidney had been attached.

Twenty-eight years of age he was the eldest son of Mr Robert Steven, of the firm of Rollo & Steven, solicitors, Dundee, and was engaged at Stirling as a lawyer.  Shortly after the outbreak of war he enlisted in the Scottish Horse as a trooper, and seven months later he received his commission in the Black Watch.

Can you tell us more about Harvey Smith Steven'? Some additional facts, a small story handed down through the family or perhaps a picture or an heirloom you can share online. Contact our curator...