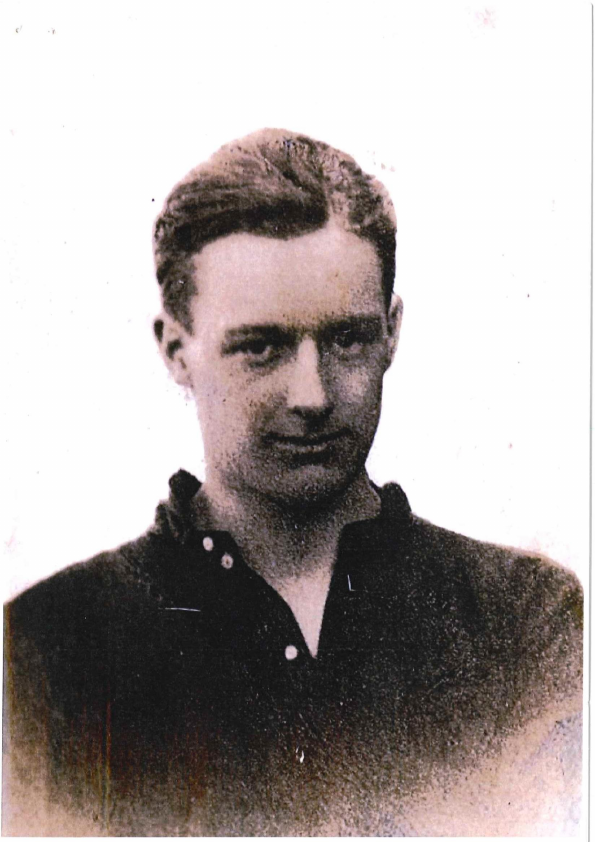 Captain Talbert Stevenson was wounded some four times over his military career. He was killed at the Third Battle of Ypres in November 1917 and was awarded the Military Cross and bar.

Talbert was the only son of Francis and  and Margaret Stevenson, Francis was involved in the family firm Stevenson’s a well known Dundee Company which began around 1850 in the Forebank Dyeworks. Talbert attended Dundee High School, Oundle and the Victoria University, Manchester. When Talbert left Oundle in 1912 he spent some time on the continent, preparing himself to join his fathers business, then in October 1913 he went to study at Manchester University, then a leading centre in the field of textile chemistry.

At the outbreak of war Talbert interrupted his studies and he enlisted aged 19 in the 4th Black Watch on 6th August 1914. He received his commission as a 2nd Lieutenant on September  2nd 1914, and trained at Dudhope Castle and Ferry House, Dundee for 7 months He was then sent to the School of Musketry, Strensall, York where he qualified with honours. On 23rd February 1915 his battalion received orders to move to France. He left Dundee and on arrival at Southampton , the battalion embarked on S.S. Rossetti and sailed on the  evening of the 25th. On arrival the battalion proceeded to the Armentieres-La Bassee sector of the front.

His battalion fought at the battle of Neuve Chapelle where he was slightly wounded but was able to remain on duty. A painting of the battalion after the battle hangs in the McManus Gallery, Dundee. The picture was painted by Joseph Gray and Talbert is shown as second figure on the left.

Talbert was to be wounded again two months later in the  Battle of Festubert, which was aimed at driving the Germans from Aubers Ridge. After the battalion attacked on the 9th they took no further part in any serious action until the Battle of Loos, however Talbert was to miss this battle as he was seriously wounded in the face and neck by a sniper on the 9th June near La Quinque Rue and was evacuated and did not return to France until 29th September 1915.

Following the battle of Loos which decimated his battalion Tarbert returned as a  gazzetted Lieutenant and was placed in charge of No5 Company. He was then made Company commander of “B” Company on 8th October. By the end of October with fresh drafts of officers and men, the 4th battalion was brought up to strength again. The battalion spent the winter of 1915/16 in a defensive role.

According the the London Gazette of 1 January 1916, Talbert was “Mentioned in Dispatches” by General Sir John French for “Gallant and distinguished service in the field and for taking German prisoners during a raid”. On 1 February 1916 he was gazetted with the temporary rank of Captain.

On the night of 17th June, Talbert commanded a raiding party into enemy trenches on the north of the La Bassee Canal. Despite meeting strong resistance, the raiding party brought back a German prisoner and valuable reconnaissance information. Talbert was complimented by his commanding officer who recorded the untiring energy displayed by Captain Stevenson during his eight and a half months in command of “B” Company. In July 1916, the month the Battle of the Somme Commenced he was offered a promotion to Brigade Major but he declined, opting to stay with his company and his men. In August, his battalion recieved orders to move south to the Somme area, entering the battle on 3rd September. In the six weeks up to November the battalion was almost constantly involved in the fighting loosing nearly 40 officers and over 1000 men. Talbert himself was slightly wounded on the 9th and again more seriously on the 13th when he was again evacuated back to England.

Talbert was awarded the Military Cross on 1st January 1917 and after medical rehabilitation he returned to France on 8th July 1917 and returned to his battalion on 17th July. He had returned in time to be involved in the Third Battle of Ypres which was launched at 3:50am on 31st July, the Battalion advancing at 8am in artillery formation and reaching its position for the final advance around 10am. It was for this action that Talbert was to receive (posthumously) his second Military Cross. He has got his battalion into assembly position with great skill and on the morning after the attack had made a very valuable reconnaissance, obtaining urgent information under heavy machine gun and rifle fire.

At around 12:30 hours on the 14 November, an enemy raiding party captured and disabled a Lewis machine gun allowing them to round the front line held by “C”Company and expose “B” Company to sniper fire,  The Battalion War Diaries at Kew simply record:- Capt and Adj T Stevenson MC and 2nd Lt J Smith were killed by snipers.

Talbert was 22 when he was killed  when he was killed and as the Dundee press was to highlight, he had been a universal favourite and had the distinction of being one of the few original officers left in the battlion that he had accompanied to France. There seems little doubt that he had been a very popular officer with his parents receiving many letters from the Battalion testifying to Talbert’s courage and popularity.

Talbert’s body was recovered from the battlefield and was buried at La Clytte Military Cemetery.

DUNDEE TERRITORIAL OFFICER IS WOUNDED BY GERMAN SNIPER. Another name falls to be added to the list of casualties amongst the officers of the 4th (City of Dundee Battalion) Black Watch.
Second Lieutenant Talbert Stevenson, only son of Mr and Mrs Frank Stevenson, 10 Dudhope Terrace, Dundee, was seriously wounded on 9th inst.
Major James S. Y. Rogers, in a letter to Mr Stevenson, explains that Lieutenant Stevenson was wounded by a sniper. He was in the trenches when a bullet entered his left cheek, passed through the back of the throat, and emerged from the right side of the neck. Fortunately, in its passage the bullet touched no vital part, and Dr Rogers states that though the wound is serious Lieutenant Stevenson is expected o make a speedy and complete recovery.
Lieutenant Stevenson is in his 20th year, and was educated at Dundee High School and Oundle, Hants. He joined the 4th Black Watch on the outbreak of war, and went to France with the battalion in February last. He is at present in hospital at Le Treport, but is expected to be transferred to his home to recuperate. The Courier, Monday, 14 June 1915, 4.

Captain Talbert Stevenson, M.C., Black Watch, one of Dundee’s most popular and gallant officers, has made the supreme sacrifice.   Deceased, who was the only son of Mr Francis Stevenson, 10 Dudhope Terrace, Dundee, was at College in Manchester when hostilities broke out, but immediately came to Dundee and received a commission in the Black Watch.

His popularity with the rank and file, which was marked ere the battalion crossed to France in February, 1915, was intensified in the fighting zone because of his fearless and unselfish spirt.  He was a strict disciplinarian when occasion demanded, but he won the confidence of his men by his manly and straightforward bearing. Captain Stevenson was most enthusiastic in his military duties, and on one occasion, on recovering from an injury–he was wounded four times–he forfeited his seniority in order to return to the front.

He was twenty-two years of age, and was awarded the Military Cross for distinguished conduct in the field, while he had previously been mentioned in despatches.

Colonel T. D. Murray, who is in command of the battalion, in a letter to Mr Stevenson says:–“No words of mine can express how I feel for you and your family .  Your son was without exception the finest specimen of the young British officer I have ever met.  His loss to the battalion is irreparable.  Since our former Colonel left he has been my Adjutant and I relied implicitly on him.

“Brave to a fault, brimming over with energy and kindness, a prime favourite with officers and men, he also possessed a very old head on young shoulders.  Personally I loved your boy as if he had been a son of my own, and I have never been so cut up over any loss in this way.”

Can you tell us more about Talbert Stevenson'? Some additional facts, a small story handed down through the family or perhaps a picture or an heirloom you can share online. Contact our curator...