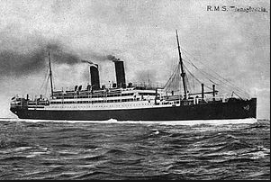 Charles was enroute to Salonika on the S.S. Transylvania, when on 4 May 1917, she was sunk by torpedo off Cape Vado, a few kilometres south of Savona, with the loss of more than 400 lives.

On May 3 1917, the Transylvania sailed from Marseille to Alexandria with a full complement of troops, escorted by the Japanese destroyers Matsu and Sakaki.

At 10 am on 4th May 1917 the Transylvania was struck in the port engine room by a torpedo fired by the German U-boat U-63 under the command of Otto Schultze. At the time the ship was about 2.5 miles (2.2 nmi; 4.0 km) south of Cape Vado near Savona, in the Gulf of Genoa. The Matsu came alongside the Transylvania and began to take on board troops while the Sakaki circled to force the submarine to remain submerged.

Twenty minutes later a second torpedo was seen coming straight for the Matsu, which saved herself by going astern at full speed. The torpedo hit the Transylvania instead, which sank immediately. Ten crew members, 29 army officers and 373 soldiers lost their lives.

Can you tell us more about Charles Stewart'? Some additional facts, a small story handed down through the family or perhaps a picture or an heirloom you can share online. Contact our curator...