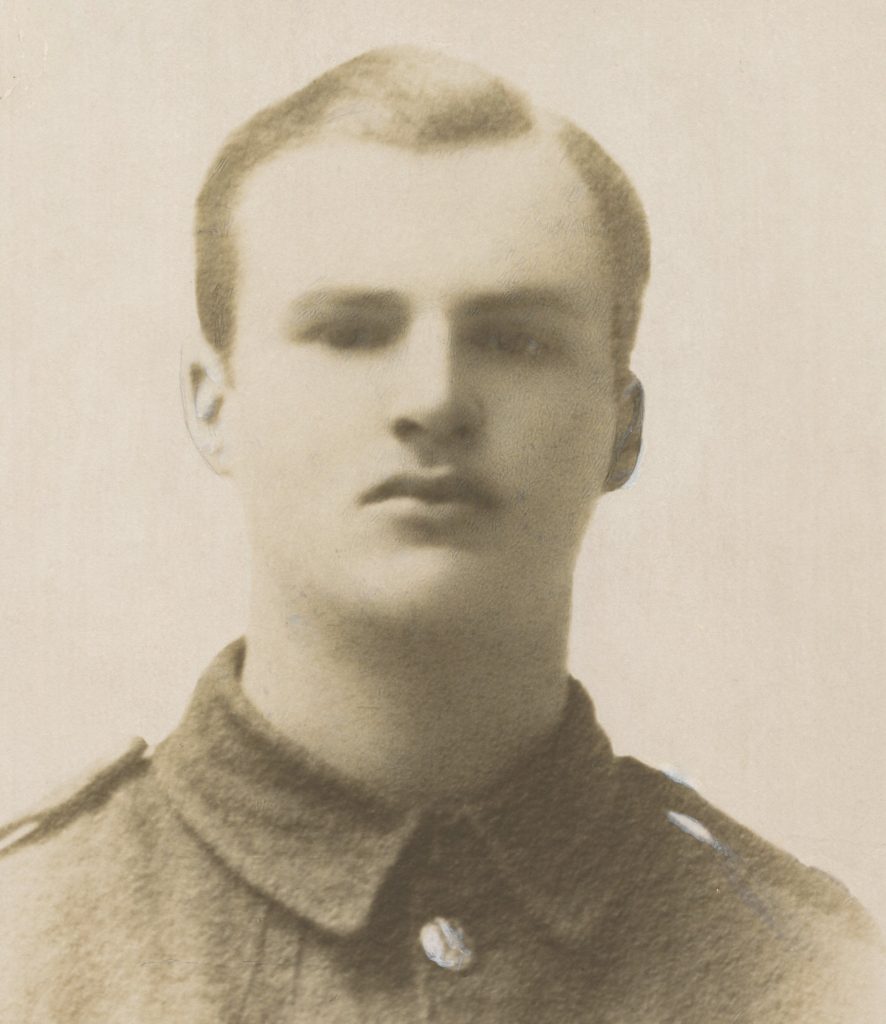 William Stewart joined the Royal Scots Fusiliers in January of 1915 when he was just 18 years old. He was a Private and his Service number was 16895.  At nineteen years old he left for France on June 1, 1915 to join the RSF who were part of the 3rd Infantry Division 9th Brigade, where he was to serve as an officer’s orderly. An orderly’s role often involved being a runner carrying messages between officers during battle. The Battalion’ war diaries record a group of 79 reinforcements arriving at the trenches near Ypres on June 4, 1915 of which William was probably included.

He joined his battalion just in time for a number of the bloodiest battles of WWI including just twelve days after arriving, the June 16th Battle of Bellewaarde Farm (read transcription of War Diaries here :http://www.bellewaarde1915.co.uk), Hoodge – 19/07/1915, Second Battle of Bellewaarde – 25/09/1915 (William’s Battalion suffered loses of 311 men including 161 MISSING!)  and the Recapture of the Bluff – 02/03/1916, all which occurred in the area around Ypres.  William, being part of the Infantry ranks or “Other Ranks” (O.R.), first as a Private and then a Corporal, is not specifically mentioned in his Battalion’s War Diaries descriptions of these battles but they are haunting readings as casualties are reported on a daily basis even when not engaged in a named offensive. William would have spent a quiet Christmas day in 1915 with his Battalion in the trenches and his twentieth birthday would have been spent training while billeted near La Commune after marching about 6 hours from the train station at St. Omer on a day that started at 6:45 am at the front.

In February of 1916, William’s Battalion moved to the St. Eloi trenches which ran through the town of St. Eloi, south of Ypres (now named Sint Elooi).

A description of the overall Craters of Eloi Battle in which William lost his life:

“The assault troops moved up in the late hours of 26 March, and took whatever cover they could on a freezing night, in snow and sleet. By just after 4am on 27th, lanes had been silently cut in the British wire, and the front trenches facing the mine positions evacuated.

At 4.15am the mines blew within a few seconds of each other and the artillery barrage joined in. The blast could be heard on the coast of England, and the enemy front line, plus some of the support trenches were destroyed. The infantry barely waited the planned 30 seconds to get going. On the right the 1st Northumberland Fusiliers reached the German wire with the loss of only a single soldier; the 4th Royal Fusiliers were however hit by machine gun fire as they went over the top. German artillery responded very quickly: less than a minute after the last of the Northumberlands left the front line, shellfire began to fall on the British trenches, no man’s land and the new craters. As the depleted Royal Fusiliers advanced into the inferno, they quickly became disorientated as the ground had changed so much – and visibility also so poor – that they simply could not tell whether they were in a crater or an old German trench. Although it was reported that the objective had been captured, they had in fact not advanced to the main line of new craters, but only just beyond the shorter distance to the left-hand mine. Crucially, Crater No 5 remained in enemy hands, although the Mound itself had gone, destroyed in the blast. The support battalions of the brigade – 1st Royal Scots Fusiliers [William’s Battalion] and 12th West Yorkshire – suffered losses from shellfire as they approached through the communication trenches, intending to move forward and consolidate the ground won. To make matters worse, it began to rain heavily, adding to water already rising in trenches, craters and shell holes following the underground destruction of a drainage system that the Germans had created.”

William’s Battalion’s War Diaries, while not specifically detailing where nor how William perished, does include some details of causalities that they suffered that day.

Trenches 27/3/16            At 4:15 am 5 mines in front of St. Eloi were sprung intentionally. Immediately afterwards our Artillery started a 4 minute bombardment of the objective. Enemy artillery opened practically at once and bombardment on front line trenches from the right of the positions. This bombardment lasted about 2 hours before slackening off. Rapid fire rifles and Machine gun fire lasted about 35 minutes after the springing of the mines. Enemy artillery fire slackened about 6:30 am and concentrated chiefly on the area of the mine craters.

William would have been included in this casualty number. He was reported in the newspapers back in Scotland on April 8, 1916 as killed in action.  He has no known burial though his name is inscribed at the Menin Gate.

There is also a small memorial for the battle located in Sint Elooi, Belgium which includes a poem by Thomas Hulme, titled ‘Trenches of St-Eloi’

Over the flat slopes of St Eloi
A wide wall of sand bags.
Night,
In the silence desultory men
Pottering over small fires, cleaning their mess- tins:
To and fro, from the lines,
Men walk as on Piccadilly,
Making paths in the dark,
Through scattered dead horses,
Over a dead Belgian’s belly.

My mind is a corridor. The minds about me are corridors.
Nothing suggests itself. There is nothing to do but keep on.

Remnants of the craters still exist today and though one is now used for swimming; they have left lasting scars on the countryside.

Can you tell us more about William Stewart'? Some additional facts, a small story handed down through the family or perhaps a picture or an heirloom you can share online. Contact our curator...