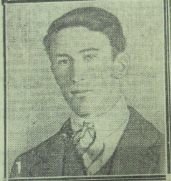 Peter died of wounds. He was the son of Mr and Mrs Strachan, 47 Forebank Rd, Dundee.

OF WOUNDS RECEIVED AT NEUVE CHAPELLE,

AND IS BURIED WITH MILITARY HONOURS.

Sergeant Peter Strachan, of the 5th Black Watch, has died from the effects of wounds he received at the battle of Neuve Chapelle.  During this action he was shot in the back, and it was later discovered that his spine had been injured.  He lay in St Gabriel’s College, Camberwell, London, which has been converted into a hospital, for about six weeks, and for the past three weeks his father, who resides at 1 North George Street, Dundee, has been in attendance.

Sergeant Strachan passed away on Saturday night, and was buried on Monday at Nunhead Cemetery, Camberwell.  His father and mother were present at the funeral, which was purely military, consisting of 150 men of the Royal Garrison Artillery.

Twenty-one years of age, Sergt. Strachan was four years in the “Fifth.” And was previously as a sawyer with James Stiven. Ltd., bobbin manufacturers, Scotscraig Mill, Tayport.  He came of a soldiering family, as his grandfather, father, and brothers have in all served 140 years.

Can you tell us more about Peter O'Brien Strachan'? Some additional facts, a small story handed down through the family or perhaps a picture or an heirloom you can share online. Contact our curator...