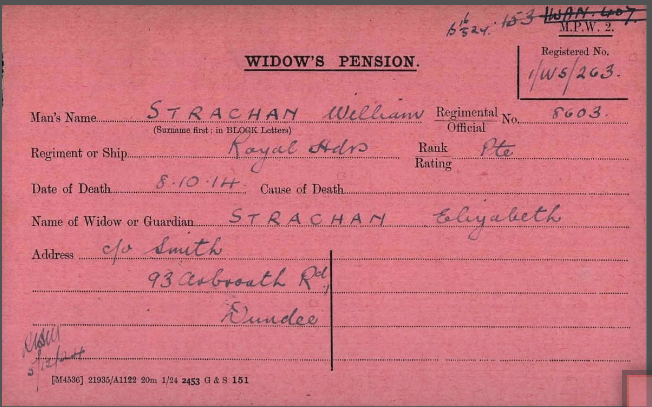 William has no known grave but is remembered on the La Ferte Memorial.

Private William Strachan, of the first Black Watch, is missing.

Information to that effect has been received by his wife, who resides at 39 Fergus Square, Arbroath, and who is at present staying with her mother at 69 Arbroath Road.  In the intimation it was stated that Private Strachan had been posted missing since October 8.

The last communication his wife received from him was on 26th September, in which he stated that he was doing well, and told her not to worry.

Private was a reservist, and served eight years with his regiment, seven of which he spent in India, and has been home five years.  Mrs Strachan is hopeful that her husband is alive, as she is under the impression that he was one of a batch of British prisoners, a photograph of whom appeared in one of the newspapers.

Can you tell us more about William Strachan'? Some additional facts, a small story handed down through the family or perhaps a picture or an heirloom you can share online. Contact our curator...