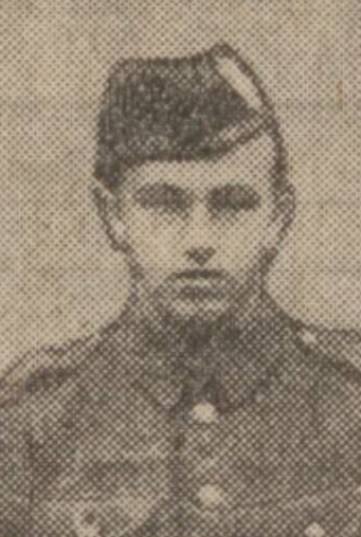 DUNDEE MAN MENTIONED IN DESPATCHES. Lance-Corporal Jas. Taylor, 5th (Angus and Dundee) Battalion Black Watch, 2 Hillbank Road, Dundee, has been mentioned in despatches.
His relatives do not know the nature of the conspicuous conduct which has brought him this honour. He writes regularly, but with characteristic modesty he has never made mention of any personal bravery.
Lance-Corporal Taylor joined the 5th Black Watch just before the holiday season last year. He is 21 years of age, and prior to the war was employed at Craigie Works. The Courier, Thursday, 24 June 1915, 2

KILLED AFTER 20 MONTHS’ SERVICE AT FRONT.

Mrs Taylor, 2 Hillbank Road, Dundee, has been notified of the death in action of her son, Corporal James Taylor, Black Watch.

The following is contained in a letter received from the chaplain :–“It will be a great sorrow to you, yet you will be proud that your son was one of the many brave lads who have suffered so patiently and died so nobly.  I have known him for a year, and know that he was faithful unto death.”

Corporal Taylor, who was 22 years of age, enlisted in a Territorial battalion of the Black Watch shortly before the outbreak of war, and was at the front since October, 1914.  Prior to enlistment he was employed as a dresser in the works of Malcolm Ogilvie & Co. Ltd., Dundee.  Deceased father is serving in the Black Watch.

Can you tell us more about James Milne Taylor'? Some additional facts, a small story handed down through the family or perhaps a picture or an heirloom you can share online. Contact our curator...