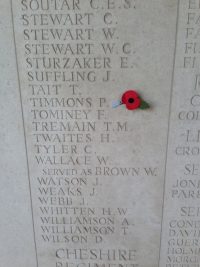 Peter has no known grave but is remembered on the Le Touret Memorial. He was the son of Mr & Mrs Timmons, 28 Taylors Lane, Dundee. Peter initially enlisted with the Black Watch in February 1914 aged 17, having previously been turned down as underweight. He served 32 days before going AWOL and was then medically discharged in December 1914. He then enlisted with the Royal Scots Fusiliers in February 1915 under the name “Timmins.

Can you tell us more about Peter Timmons'? Some additional facts, a small story handed down through the family or perhaps a picture or an heirloom you can share online. Contact our curator...